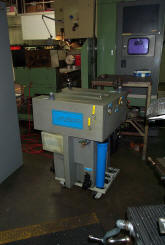 Before the effectiveness of any coolant reconditioning system can be assessed,
it is necessary to keep in mind the three basic processes which degrade coolant:

These three processes are universal, occurring in systems composed of either central or individual sumps.  Both soluble and synthetic coolants are degraded by the same process.  The degradation is constant, beginning as soon as coolant is added to a sump.  They result in a coolant totally degrading in two weeks and six months (depending on conditions).  The usual time frame for complete degradation is four to six weeks.

Each of these degrading processes is addressed in various ways.  However, it is imperative to remember that all three must be dealt with or the coolant will fail prematurely.  Treating only one or two of the three degradation processes will improve coolant life, but it will not give a true reconditioning system.

I. Included Contaminants: there are three forms

Any materials which are truly dissolved in the coolant, cannot be removed from the coolant by mechanical means.  Their removal would require complex chemical reaction, which would destroy the coolant.  For this reason, most hard water salts and biological by-products cannot be removed. This means that the coolant will eventually reach a point at which it must be disposed of properly.  To help postpone disposal as long as possible, the use of deionized water is recommended in reconditioning systems.  Even then, the best any recycling system can realistically promise is an 80% to 90% reduction in waste disposal.

There are claims for coolant systems with zero disposal. These claims can be true, but they have little to do with the reconditioning system. The reason is “drag-off”.  Drag-off is all the coolant which is carried off with the parts, thrown away with the chips, splashed on the floor, etc.  If the drag-off is sufficient (usually greater than 25% per week), the hard water salts and biological by-products will not build up to levels which will cause problems. However, drag-off of this magnitude is extremely expensive and few well-run plants would tolerate the cost.

One method for removing undissolved contaminants is the use of a centrifuge or a cyclone filtration.  Although, the mechanics are different, they both operate on the same principal.  The coolant is caused to spin at high speeds.  This spinning creates a type of artificial gravity through centrifugal force.  The “heavier” particles, such as fines, are forced to the outside.  “Lighter” particles, such as tramp oil and extremely small fines, float to the inside with the coolant and are not removed.

The second method for separation of contaminants is simple easy to obtain filters, which are easy to maintain and to use.  The right kind of filter will help maintain surface finishes on the parts and prevent the sump from physically filling up with fines and swarf.

Heat Sterilization The coolant temperature is raised to between 140 degrees F and 160 degrees F.  It is maintained there from 8 to 12 hours, then allowed to cool. This is a very ineffective method of biological control.

Biocides can either be added manually or metered in through the reconditioning system.  They have, when added in proper concentrations, several advantages. They continue to kill bacteria and mold for several weeks. The amount or type of biocide can be altered to meet changing plant conditions and they help keep the sump and coolant lines free of biological contamination.

It is a commonly held view in most shops that the primary cause of coolant degradation is the presence of free or “tramp” oils floating on the surface of the coolant.  This view is reinforced by the observance of clumps of mold or bacteria attached to the masses of oil or accumulating on sump walls in the presence of oil.

It is true that tramp oils are an organic nutrient and are one of the causes of coolant degradation.  However, coolants will support biological growth even without the presence of tramp oils.  Heavy layers of floating oils do promote the growth of anaerobic bacteria by shutting off oxygen to the coolant sump.

The real problem with tramp oils is their complete removal from the sump.  This is often difficult because of the configuration of the sump and/or its location (for example, under the machine bed).

In an overall coolant management program, other concerns which must be dealt with include chemical depletion.  As a coolant is used, whether it is a soluble oil or synthetic coolant, its components change.  Individual components can plate out on parts, combine with hard water salts, be broken down by bacteria or oxidized by heat.  As the recycling lop is closed and coolant life is extended for longer and longer time periods, the addition of fresh coolant to “bring up concentration” results in an unbalanced coolant formulation.  This can cause many of the same problems the system was designed to eliminate.

For a coolant recycling system to work properly, the coolant must be analyzed regularly.  On the basis of this analysis, the coolant should be selectively fortified.  This requires an ongoing program of coolant maintenance.  The more effective the mechanical system for recycling coolant is, the more important this maintenance program becomes.

In a well-managed coolant recycling system, wherever close attention is paid to the three degradation processes – contaminant inclusion, biological attack and tramp oil contamination, coolant disposal can be reduced by up to 90%.  The goal of any good recycling system is to reach the point where hazardous waste disposal can be changed from a nightmare to a minor irritation.